Discernment of the New Madras Service of Communion (MSC)

The Reconstitution of the new Service Team for  DSC CHARIS (Madras Service of Communion) of Madras Mylapore Archdiocese was held on the 26th and 27th of February 2022, at the St. Thomas hall, of Santhome Cathedral.

Prayer groups and Parishes had nominated their representatives to undergo discernment for being elected into the service team. As a preparation, these representatives had gone through an online workshop for leaders, conducted by Bro. Colin Calmiano for three consecutive days, which helped in grooming future leaders. The Seminar dealt with topics such as “Servant Leader & Obedience”, “Time management” and “Intimacy with the Holy Spirit & Praying in Tongues”.

On the 26th, along with 16 nominees who were identified for discernment, the existing MSC members and many representatives from the prayer groups & parishes gathered together to spend the day in prayer and contemplation. Anointed Praise and Worship sessions by Sister Marcia along with YU4C and Eucharistic Celebration by Fr. Arulraj created an atmosphere of solemnity and grace. Bro. Wilson rendered the welcome address, highlighting the qualities that are expected from the new leaders of MSC. Motivating talks such as “Importance of Teams, Ministries and Prayer Groups, the building blocks of CCR given by bro. Manuel Thomas, “The Importance of Statutes”, by Bro. Vargheese Ittera,  “Discernment” by Fr. Paul, Sdb, set the stage for the discernment process. The day concluded with the nominees receiving the Sacrament of Reconciliation.

On the 27th, the reconstitution of the new team was conducted through a series of steps consisting of election by voting and discernment. The day began with a powerful praise and worship session led by Bro. Gangai and Ms. Preethi. The outgoing MSC Coordinator Bro. Wilson and MSC Member Bro. Leslie presented a report on the various events, programs, ministries and outreaches that were conducted by the service team from 2019-2022. Bro. Joy Anthony gave a powerful talk on “Come let’s build the walls of Jerusalem” that infused a sense of direction and guidance for the upcoming Golden Jubilee celebration. In the Inaugural session, after lighting the lamp by the leaders, Bro. Joy Antony released the Golden Jubilee issue of Sprit Aglow.

The Spiritual Director, Rev Fr. Arulraj along with the NSC Coordinator Bro. Joy Anthony, NSC member Bro. Vargheese Ittera and Bro. Wilson initiated the process of election. Bro. Vargheese explained the process of election and led the participants into a systematized mode of preparation for the same. The discernment process began by the 16 nominee’s introducing themselves briefly to the gathering. They were asked to give details such as their name, parish, prayer group, years of participation in the Renewal, prior experience in service teams and charisms. Ballot paper containing the names of the 16 nominee’s was given to the Electoral College who had gathered for the event. Instructions were given to select nine out of the 16 nominees. The ballot papers were then collected by volunteers and tabulated by the discerning team. A prayerful team consisting of Fr. Paul, Margaret Rosair and Manuel Thomas were praying, discerning and interceding over the 16 nominee’s. They were not given the names of the individuals but only numbers corresponding to each individual. After prayerful discernment, they handed over the received prophetic messages to the discernment panel consisting of Fr. Arulraj, Bro. Joy Anthony, Bro. Vargheese and Wilson Irudayaraj (Co-ordinator of the outgoing MSC). The process of discernment took more than four hours and through it all, the time was spent before the Blessed Sacrament in prayer, worship and intercession. During this time of prayer, the 16 nominee’s met the discernment team individually and were asked questions pertaining to their availability, charisms, talents and challenges etc. 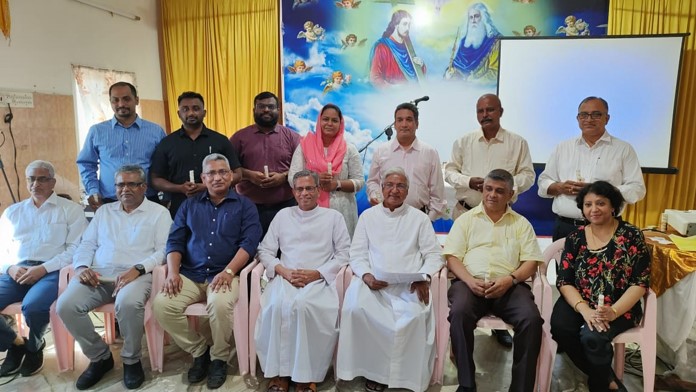 After a rigorous process of discernment, nine leaders were selected to be in the new MSC team and were called to the stage for taking a prayerful oath giving their commitment and dedication to the service of the CCR.  Fr. Arulraj and Fr. Paul anointed the new members by laying their hands upon their heads and praying over them. The new Coordinator, Romeo Lobo and Secretary, Regina Nathan were elected by the new team through a voting system.

The celebration of the Eucharist by Fr. Arulraj and Fr. Paul completed this discernment process which was more a spiritual journey for not only the discerned members but also for all those who had gathered for the event.

The new and outgoing Service team member had their first meeting along with Bro. Joy Antony who requested the teams to work together for the Golden Jubilee Convention.

One could feel the tangible presence of the Holy Spirit who led every session with His presence and who invigorated every individual gathered under the name of our Lord Jesus. We give all glory to our Heavenly Father and our Lord Jesus and the Holy Spirit for blessing us with their constant grace and presence.